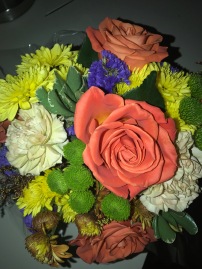 My life at 90 days sober is excruciatingly boring — unless you like books; wanna talk about books?!? — so I’ll try to spice this thing up for the audience.

I RIPPED MY CLOTHES OFF THE SECOND I WALKED THROUGH THE DOOR ON FRIDAY.

Approximately five seconds later I was wearing my husband’s pajama pants and one of his ancient white long underwear tops (think: Peter Stormare’s character in “Fargo”)  and had my face buried in a mixing bowl filled with chocolate Jell-O pudding (think: Augustus Gloop)…but still!

Kidding aside, Day 90 looked exactly like Day 89, Day 88, Day 8, etc. Maybe swap the pudding bowl for a giant bag of lightly-salted almonds, but the variance stops there.

Actually, for my three-month sober anniversary, I should mention I did get a balloon bouquet with a “Proud of You” mixed in, an actual bouquet with my favorite orange roses, and brand new Yankee Candles in scents like “Autumn Wreath” and “Ciderhouse” from the aforementioned husband. In case you didn’t already think he was solid [bleep]ing gold, he still accepts newspaper freelance assignments every Friday night after he’s done with his day job, to make extra money for us. So, while my gifts certainly added a touch of excitement to the usual evening routine, Hubby and I didn’t have the chance to “celebrate” together.

I’m not sure how many shenanigans we’d have gotten up to in the half hour before my strict 8 p.m. bedtime, though. 😴

I’ve made it through 90 days by keeping my outer environment as blissfully vanilla – pudding flavor notwithstanding – as possible, and I think it’s because my inner environment is no less than a freaking Sharknado. I’m constantly swirling around in a funnel cloud of confusing thoughts and wildly fluctuating emotions, while also continuing to function at a mentally demanding job, and it’s EXHAUSTING. There have been times I was so overwhelmed I actually thought I might be going insane, which might explain why I’ve also felt completely ill-equipped and unable to interact with other people. Like, less so than usual.

I do have some recovery friends, and one of them asked me, “What do you do after work every day?” because she too is trying to figure out how to fill the anxious, empty hours where booze used to live. I was like, “Go to meetings, go home and go to bed. Sometimes, I skip the meetings.”

I also read a lot. I forgot to mention that part to her, but she’s the one who recommended most of the authors I’m obsessed with, so I probably didn’t have to. By the way, if you DO want to talk about books, here’s my sobriety bibliography so far: “Nothing Good Can Come From This” by Kristi Coulter, “The Unexpected Joy of Being Sober” by Catherine Gray, “This Naked Mind” by Annie Grace, “Drinking: A Love Story” by Caroline Knapp, “Blackout” by Sarah Hepola, and “Unwasted” by Sacha Scoblic…and I want to read Jowita Bydlowska’s “Drunk Mom” next, but I’m trying to show some restraint. I don’t want to take ALL the money I’ve saved on tequila and dump it at the iTunes Store.

So, anyway, add “read while I’m in bed” to that scintillating daily schedule. Not much changes on weekends, other than my long walks in the park and even longer rambles in this space, and honestly, I contemplated not even writing a blog this week.

Right now, I feel like a sleepy old square with nothing to say.

I had enough words this morning to tell my therapist about my helter-skelter mental state, and she did an amazing thing you’d never expect from someone with a psychology degree and years of experience getting paid to deal with addicts and their insane thinking patterns.

She explained all this shit to me! With a VISUAL AID!

She pulled out this big chart with a circle drawn in the center and a bunch of arrows darting all around it. It was titled “The Abstinence/Relapse Cycle.”

At the very top is abstinence, or sobriety, where you quit drinking and experience a “loss of chemical support.”

Hand raised! Present and accounted for!

So this is totally normal. This is what happens to everyone when they don’t have that thing they used for 20 years to calm the emotional shitstorm, drown out the convoluted thoughts and take a freaking break from being themselves. They feel all the feelings they used to numb.

Great. Feelings officially being felt. So, what’s next? Where do I go now?

Back to the chart. ➡️Increase in addictive impulses or pre-relapse behavior. ➡️ Substance or behavioral relapse.

“You’re in a dangerous place right now,” the therapist told me. “You could leave here and go right to the liquor store.”

THERE WAS TEQUILA IN MY KITCHEN LAST SATURDAY NIGHT.

Did that spice things up at all? Consider it a reward for those who made it this far.

It’s a true story, and it was by far the most bizarre thing to happen to me in the past three months — maybe longer.

I did not buy the tequila. It belonged to my neighbor, who had been drinking it out in our shared entryway and apparently had visions of the time we drank it together one early summer evening many moons ago.

In a whirlwind two minutes, she managed to push through our front door and past my husband, clutching a bottle of Hornitos in one hand and a shot glass in the other, and found me stuffing the fridge with groceries. I had to shut the freezer door to see what the commotion was all about, and when I did, the smell overtook me.

That smell. It used to emanate from me, from Saturday morning until Sunday night, sickening my husband while I remained blissfully nose-blind. And here it was, in my face, in my kitchen, when my sobriety was a just-born baby still covered in goo and I felt like a pajama-clad Martian who’d just plummeted to Earth. What the 🤬 was happening?

“Do a shot with me!” she said, and I might have responded in Martian language, for all I recall. I think I barked “NO! I CAN’T!” but my husband interceded before any memorable conversation could be had. And as quickly as she appeared, she was gone.

For the next half hour, I cried, because that’s what just-born babies do when they feel feelings. My husband held me. The episode passed.

My neighbor does not know I quit drinking. I might tell her; I might not. I don’t hold that incident against her, just so we’re clear. My sobriety is not, nor should it be, the center of anyone else’s universe. But that weird moment sure did make me think how easy it would be. How easy it would’ve been right then and there.

Good thing I’ve got this really great guy living with me, huh?

“But I won’t,” I said to my therapist this morning when she brought up the liquor store. “And you want to know why?”

If there was an answer forthcoming, I didn’t wait for it.

“That.” I pointed, my own arrow of a visual aid, to the empty chair next to me. In our last session, my husband had been sitting there, by my side, the same place he has stayed for 12 years and change, loving me through a kind of “sickness and health” situation he never could’ve envisioned on our wedding day, and a frumpy-clothed, pudding-faced, 8 p.m.-bedtime reality he probably hadn’t expected to arrive until at least our 70s.

I knew the therapist was absolutely right, that I was in a dangerous place. All alcoholics are, whether they have 90 days or 20 years, they’re starting sobriety from scratch or trying it all over again. Feeling all the uncomfortable shit people feel, thinking all the weird shit people think, doing all the boring shit people are obligated to do every day, and simply being our flawed, complicated, ever-striving selves  — well, it’s not always fun. It’s exhausting. Looking for a way to escape it all is extremely tempting.

Relapse is, and will always be, extremely easy.

Thank God I have a damn good reason to keep doing what’s hard.